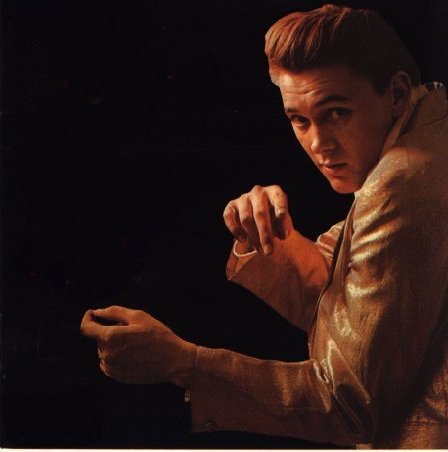 Billy Fury was born Ronald Wycherley on April 17th 1940 in the Dingle area of Liverpool to Albert and Sarah Jane (Jean) Wycherley.

A bout of rheumatic fever at the age of six and another at sixteen led to periods in hospital resulting in a permanently damaged heart which was to trouble him throughout his life.

He first worked as a riveter, then a deckhand on the River Mersey tug- boats. While working on the boats his interest in music was broadened by listening to Rhythm ́n ́Blues and Rock ́n ́Roll discs, brought in by seamen from across the Atlantic.

“We went to see the movie ‘The Girl Can ́t Help It’ and one of my mates said I looked a bit like Eddie Cochran. So I bought a guitar and started writing songs.

While working at Joshua Harris store he met Margo King, who was to be the inspiration for his second single when she left for Australia.

In 1958 he sent a tape of “Maybe Tomorrow” and “Margo” along with a photograph to impresario Larry Parnes, who’s act, Marty Wilde, was appearing at the Essoldo Theatre, Birkenhead. He took the ferry across the Mersey, was invited into Marty ́s dressing room where he sang the two songs. Parnes was impressed.

Then Larry said ‘If I say to you you ́re going on stage in eight minutes, will you say yeah?’, and I really felt like saying no, but for some reason I thought I ought to say yeah.”

He performed on stage after the interval and received a terrific ovation. Parnes signed him on the spot. The next day he was heading to Manchester with the rest of the show.

But the name Ron Wycherley didn ́t have the right sound for a pop star. Larry Parnes came up with a new name – BILLY FURY.

Billy was capable of dark, brooding, intensely sexual performances. On October 30th at the Theatre Royal, Dublin, the curtain was dropped during his act.

“All I did was squirm about a bit and they banned me for that.”

“Later on Decca Records got really heavy with me and persuaded me that I was going in the wrong direction and slowly swayed me towards the ballads.‘

A Thousand Stars reached the bottom of the charts, but it was Halfway To Paradise that really made him a star, earning him a Silver Disc for 250,000 sales. The follow up, Jealousy reached number 2, then I ́d Never Find Another You got to number 5.

Billy made his silver screen debut in the 1962 low-budget movie “Play It Cool. An EP from the film was launched and it was a huge success, spending 45 weeks in the charts, reaching number 2. The single “Once Upon A Dream”, also from the film, reached number 7.

1963 started with a single “Like I ́ve Never Been Gone”, reaching the number 3 spot.

But this was the year the Merseybeat emerged and it meant the end of the road for the old style pop stars. The next singles “I Will”, “It ́s Only Make Believe” and “I ́m Lost Without You”, still made the Top 20, and Billy made his second movie “I ́ve Gotta Horse”. “In Thoughts Of You”, Billy ́s 25th Decca single reached number 9 and was to be his last Top 10 hit.

In December 1971 Billy underwent his first major heart surgery at the National Heart Hospital, in London. After a good rest he returned back to cabaret circuit backed by Milky Way (later to be rechristened Fury’s Tornados by Billy when they released Telstar 74), and the next year he established his own Fury record label and issued a one-off single Will The Real Man Please Stand Up.

Billy bought a 100-acre farm in the Welsh mountains, near Llanwrda, where he began to slow down, breeding horses and sheep and bird- watching. The year 1974 saw Billy on a Rock ́n ́roll revival tour with Marty Wilde, Heinz, Tommy Bruce , Furys Tornados etc

He returned to cabaret work but in 1976 his health failed again and on his second visit to Harley Street his valve was replaced, which forced him into retirement for the rest of the 70 ́s.

On March 7th 1982 Billy collapsed at his farm with critical kidney and heart condition. His doctors didn’t think that he would make it through the night, but he did. A picture in the Daily Mirror of a smiling Billy resulted in a flood of get well cards from fans.

The year 1983 looked promising for Billy, with a brand new album was on it ́s way, but on January 27th after working late in the studio, Billy returned home and collapsed during the night. He was found unconscious the next morning and rushed to hospital. This time he lost his battle and died at the age of 42. His funeral was held at the St. John ́s Wood Church in London. After the service Billy was buried at Mill Hill cemetery.